I know you will be excited to know that Dr. Dre and Ronald Isley have been spotted together. Yes, you have heard me right! Ronald Isley is the legend of the Isley Brothers. They were spotted working in the studio together.

When I talk of Isley Brothers I am sure your mind cannot take off the VERZUZ battle series. Do you remember the latest episode from VERZUZ? Well, I can’t stop thinking about the ultimate face-off of Isley Brothers against Earth, Wind & Fire. It was just last weekend i.e 4th of April that this battle series was telecasted.

Now, let me disclose the reason, why am I trying to put your adrenaline rush to move to the edge! Actually, just sometime before the initiation of the event, the frontman of the band, Ronald Isley went to Dr. Dre’s studio. Yes, you have heard me right. Being in that studio, he not only made the link with Dr. Dre, the iconic producer of all time but also his in-house producer Fred Wreck.

How do I know about this meet-up? Well, nothing is difficult in the era of social media. Actually, Ronald uploaded his photograph with Dr. Dre on his Instagram handle. Do you want to know the caption of the picture? Well, it says “Today with Dr. Dre!” There were a series of pictures of the duo just in front of the studio of Dr. Dre. 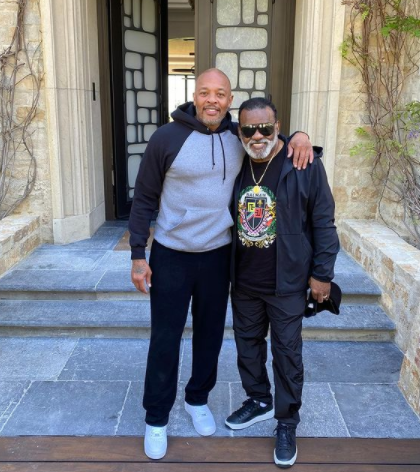 I know you might be wondering just a photograph in front of the studio doesn’t claim about them working together. So here comes another revelation. Of course from the post of Isley, and reading the caption neither you nor I can tell about their work. But Wreck did give us some reliable hints. Wreck too uploaded a post with a caption saying that it was utmost astonishment for him for getting to work with one of his heroes. And that’s not all, he tagged Ronald in that post.

So, are you wondering what their work can be? To the best, I can suggest them working together on Dre’s new album ‘Detox’. Well, Dre started working on his new project Detox only this January. This album is the most anticipated album. Dre was suffering from a brain aneurysm and was hospitalized for quite some time. Well, on being discharged, Dre started working on Detox. So, don’t you think there’s a possibility for Isley to give his vocals to this new album?

In February, I hope you have heard the rap of the legendary producer where he elucidates his divorce and brain injury. This rap is available to you to be previewed as a snippet of a new Dre track.

Have you heard the snippet from DJ Silk in the recent Instagram Live session? He played the snippet of a new record which is yet to be titled. The record features KXNG Crooked. DJ Silk is a longtime affiliate of Dre’s Aftermath Records.

Are you aware of the celebration of the 30th anniversary of Death Row Records? Well, reissues of albums of 2Pac, Snoop Dogg, and Dr. Dre are on the way for their celebration.

Who can forget the ’90s hip-hop! Do you know Death Row dominated that era of music? Apart from the aforementioned rap labels, I think the names of Nate Dogg, Tha Dogg Pound, MC Hammer, The Lady Of Rage, and KXNG Crooked are also inevitable.