Anime series have a different level of fan base. I think you will not disagree with me. This article will bring you a package of excitement for all anime lovers. Don’t trust me? Have a look by yourself. Read the entire article to know about the new anime series which is going to unfold before you very soon.

Are you wondering which anime am I talking about? Well, I am talking about ‘Yasuke’ Black Samurai Anime. I believe you are curious to know further. So, keep reading.

You can enjoy the six-episode series, Yasuke on Netflix. Yes, switch on your Netflix to watch another anime which is sure to hold a position in your favorite list of anime series. You must also be happy to know that Netflix has already released the official trailer of Yasuke. Why wait? Go and watch it.

Netflix released the official trailer days prior to the premiere. So, tune on to Netflix to watch its highly anticipated new anime series. Netflix is premiering the official trailer across the globe on the 29th of April. You can now enjoy the trailer both in English and Japanese language.

Yasuke is based on the true story of a Black samurai who was an inhabitant of Japan during the 16th century. The first trailer clip promises to show few liberties with the story despite having the real-life source material.

Won’t it be better if I give you further insight into the story?

TALENTS BEHIND THE SERIES

First, let me introduce all the talents behind the series. The new anime series was created by the very talented LeSean Thomas. He is very well known for creating Cannon Busters. And the animation is handled by the Japanese renowned animation studio MAPPA. The black samurai is voiced by LaKeith Stanfield. The series is also reviewed and executive produced by Flying Lotus. Flying Lotus added another layer of thrill and excitement to all the actions with the phenomenal soundtrack.

In the series, Yasuke will revolve around an African-originated real-life man. The man offered service under the Japanese daimyō Oda Nobunaga in the 1500s. Amongst the societal bedlam between pugnacious daimyō in a war-torn feudal Japan filled with mechs and magic, the Black samurai will find himself trapped. 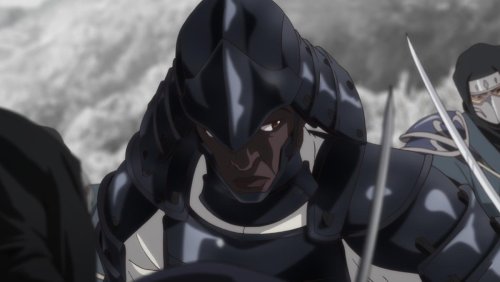 Yasuke is now in search of peace after all past violence. In the process of struggling to retain peace after the heinous past, Yasuke finds himself entangled with another huge responsibility. He is asked to protect a mysterious child. Do you know from whom? The mysterious child is targeted by dark forces and bloodthirsty warlords. So I hope now you can guess what his task must be. He has to take up his sword and protect the child without fail from all the dark forces and bloodthirsty warlords. He needs to indeed transport the child.

In a gist, you will now get to enjoy the story of the first African samurai, Yasuke who played a huge role in serving the legendary Oda Nobunaga. The story will soon be released to the world.

Do not forget that Yasuke will debut on Netflix on April 29th.