New Netflix Sci-Fi Thriller Oxygen: Here Is Why You Should Watch It

Are you wondering about the title of the series? Well, it OXYGEN and it is a brand new French sci-fi thriller.

OXYGEN is centered around the human race who are trying to cling to survival in an inhospitable world. If you watch the show, you will witness that the show begins with the portrayal of a woman called Liz waking up in a cryogenic pod. She has lost her memory and in fact, the amount of oxygen starts declining at an alarming rate. In the end, you will realize that the story has a lot more to portray than just the tale of Liz.

Do not worry if the storyline is a little complex for you to understand. Read this article till the end to understand the interpretation of the director.

OXYGEN will be directed by a very talented director named Alexandre Aja. Do you know that Aja accepted and signed onto the film three years post the initiation of the pre-production? If not, well now you know!😋 However, Aja has developed a deep love for the tale which synchronizes so well with the fight for the survival of the human spirit during this global pandemic.

In an interview with Inverse, Aja elucidated the section of the storyline that attracts him the most. He is curious to know the motivating elements in a human being’s life that help him fight against all odds especially when he is about to die. He wants to learn these secrets and wants to portray them to common people.

Well, a part of Aja’s answer from his curiosity is portrayed so well in one of the scenes in the show. In the scene, you will see that sometime prior to Liz running out of air, she was recording an audio message for her husband, Leo. Isn’t it touching? What might she say?

Liz records her message where she says that despite the fact that they have never met, she would however cherish every memory that she holds of him. That very audio recording springs enthusiasm in her to seek solutions to her problem and try to save her life.

The next part of the spoiler that I am about to disclose is sure to leave your mouth wide open.

Liz was alive only for 102 minutes. There’s a little secret about Liz and Leo. Liz is one of 10,000 Omicrons! Are you wondering what are Omicrons? Well, these kinds of species are genetically engineered clones and the intention behind their creation is to regenerate the human race on a new planet.

Leo has a different story. A deadly virus killed him and he breathed his last on Earth. However, the Omicron version of him survives. He remains in an immobile state and maybe waiting for the ship, to arrive on the new planet, Wolf 1061c carrying different pods in it. 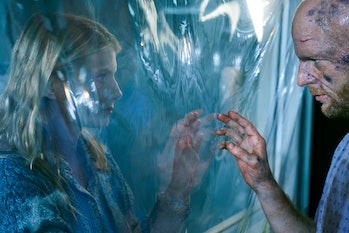 You are sure to experience a lot of twists and turns in the movie and trust me, you will get to enjoy a lot of science in the movie. Speaking about the new planet, Wolf 1061c, I am sure you are curious to know a bit more.

Wolf 1061c is a real planet that is tidally locked such that one side is always remains illuminated while the other side always remains dark. There is a thin strip that divides the two areas and this thin strip can be habitable. However, cryogenic stasis is the necessity to survive the long journey because the star is 13.8 light-years away.

But the question that is sure to stress you out is whether the journey on the new planet is successful? But all that I can inform you right now is that the end of the show portrays Leo and Liz embracing on a beach with a nearby planet looming overhead. Obviously, these aren’t technically the real Leo and Liz. The couple’s love story ended with the death of Leo. Liz was left behind to grow old and dedicated her life to researching memory transplantation.

Now you are sure to guess that the show is going to have two endings. Of which, one is the tragedy caused by a pandemic while the other is the new beginning for not just Leo and Liz but for the entire human race. What do you think, which end will be portrayed as the “real” one by Aja?

Aja in the interview also expressed his dilemma with the end. Undoubtedly he wants to sound optimistic and wishes to portray the couple’s love survived all odds. However, at the end of the day, the movie is a true battle in his perception.

Aja wants the viewers to decide the end of the film. Yes, you can give your opinion too. In my opinion, if the same characters can co-exist in two different versions, why can’t the movie have two different conclusions? What is your opinion? Do not forget to share with us.

As per Aja’s opinion, the movie will to some extent feel like life after death. Among the characters, which is going to be the real characters and which should turn to be a fake version. It feels like the interpretation is going to vary from person to person. Do not forget to share with us your interpretation of the story.

The Upcoming American science fiction action horror film is coming back on screens. This time like all the Predator series...

Bumblebee became one of the massive hits on the big screen in 2018 which increased the demand for the sequel...

The Bad Guys 2: Will there be a sequel to the film? Rumors and Updates

Buzzing news that is floating around the towns of Hollywood is that the Animated film The Bad Guys might get...

The upcoming American superhero film Black Adam is arriving on screens with its amazing and intense story and twisting plot...